Sprovieri is pleased to announce Automóvel (Automobile) a new video work by Cinthia Marcelle, which will be presented as part of the artist’s second solo show at the gallery.

Marcelle uses video and photography to document the effects that her interventions have on the usual order of things. Particularly, Marcelle’s work is inspired by the chaos and the turmoil of possibilities which can be found in everyday life. Her actions create situations that challenge our notions of conventional behaviour by introducing humorous coincidences and connections.

Representing the constant flow of vehicles on a two-way urban street, the video Automóvel (Automobile) focuses on the pace of life on any normal working day.  Yet when the owners of those cars become slaves to their vehicles, what you get is a scene reminiscent of Sisyphus. Condemned to pushing their vehicles ever forward, the drivers are slowly enveloped by the night.

Automóvel (Automobile) was produced in 2012 by Katásia Filmes and 88.

Cinthia Marcelle was awarded relevant International Prizes such as the Future Generation Prize from the Victor Pinchuck Foundation in 2011 and the TrAIN artist in residency award at Gasworks, London, in 2009. 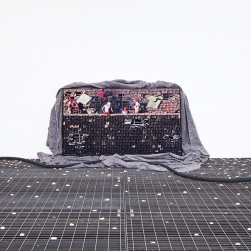